The Gateway Engine component is deployed in each participating cluster and is responsible for establishing secure tunnels to other clusters.

The Gateway Engine has a pluggable architecture for the cable engine component that maintains the tunnels. The following implementations are available:

The cable driver can be specified via the --cable-driver flag while joining a cluster using subctl. For more information, please refer to the subctl guide.

WireGuard needs to be installed on Gateway nodes. See the WireGuard installation instructions.

VXLAN connections are unencrypted by design. This is typically useful for environments in which all of the participating clusters run on-premises, the underlying inter-network fabric is controlled, and in many cases already encrypted by other means. Other common use case is to leverage the VXLAN cable engine over a virtual network peering on public clouds (for e.g, VPC Peering on AWS). In this case, the VXLAN connection will be established on top of a peering link which is provided by the underlying cloud infrastructure and is already secured. In both cases, the expectation is that connected clusters should be directly reachable without NAT.

The Gateway Engine is deployed as a DaemonSet that is configured to only run on nodes labelled with submariner.io/gateway=true.

The following diagram shows a high level topology for a Submariner deployment created with:

In this case, Libreswan is configured to create 4 IPsec tunnels to allow for:

The following diagram shows a high level topology for a Submariner deployment created with:

With the VXLAN cable driver routes in table 100 are used on the source Gateway to steer the traffic into the vxlan-tunnel interface.

The figure shows a simple interaction (a ping from one pod in one cluster to another pod in a second cluster) when Submariner is used.

If the active Gateway Engine fails, another Gateway Engine on one of the other designated nodes will gain leadership and perform reconciliation to advertise its Endpoint and to ensure that it is the sole Endpoint. The remote clusters will learn of the new Endpoint via the Broker and establish a new tunnel. Similarly, the Route Agent Pods running in the local cluster automatically update the route tables on each node to point to the new active Gateway node in the cluster.

The impact on datapath for various scenarios in a kind setup are captured in the following spreadsheet.

The Gateway Engine continuously monitors the health of connected clusters. It periodically pings each cluster and collects statistics including basic connectivity, round trip time (RTT) and average latency. This information is updated in the Gateway resource. Whenever the Gateway Engine detects that a ping to a particular cluster has failed, its connection status is marked with an error state. Service Discovery uses this information to avoid unhealthy clusters during Service discovery.

The health checking feature can be enabled/disabled via an option on the subctl join command.

The load balancer mode is still experimental, and is yet to be tested in all cloud providers nor in different failover scenarios.

The load balancer mode is designed to simplify the deployment of Submariner in cloud environments where worker nodes don’t have a dedicated public IP available.

When enabled for a cluster during subctl join, the operator will create a LoadBalancer type Service exposing both the encapsulation dataplane port as well as the NAT-T discovery port. This load balancer targets Pods labeled with gateway.submariner.io/status=active and app=submariner-gateway.

When the LoadBalancer mode is enabled, the preferred-server mode is enabled automatically for the cluster, as IPsec is incompatible with the bi-directional connection mode and the load balancers and client/server connectivity is necessary. 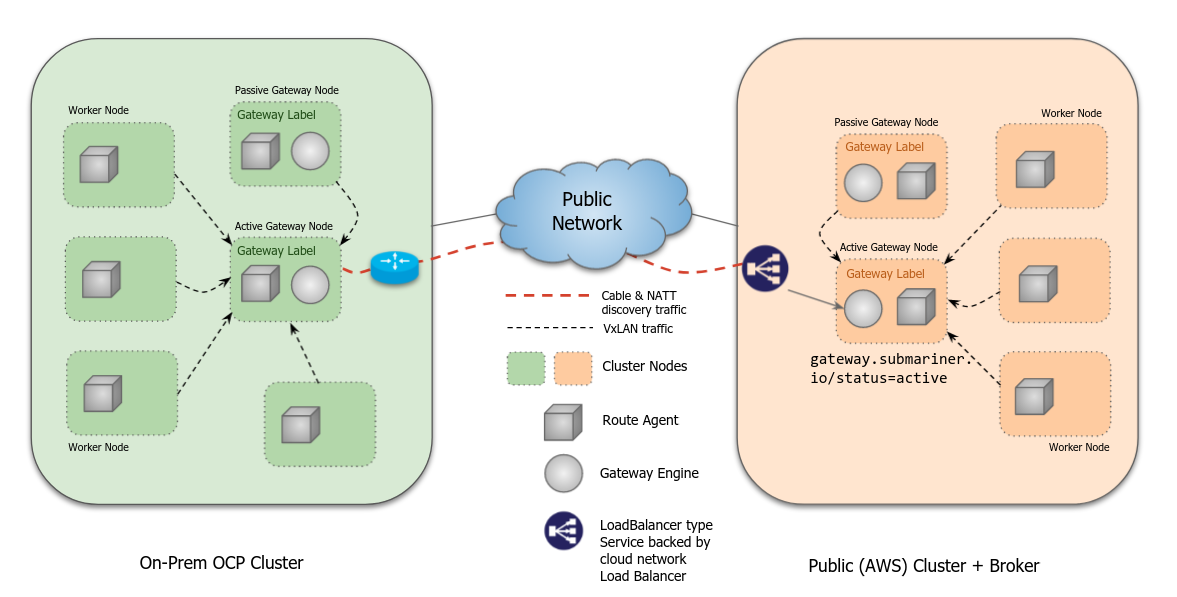 If a failover occurred, the load balancer would update to the new available and active gateway endpoints. 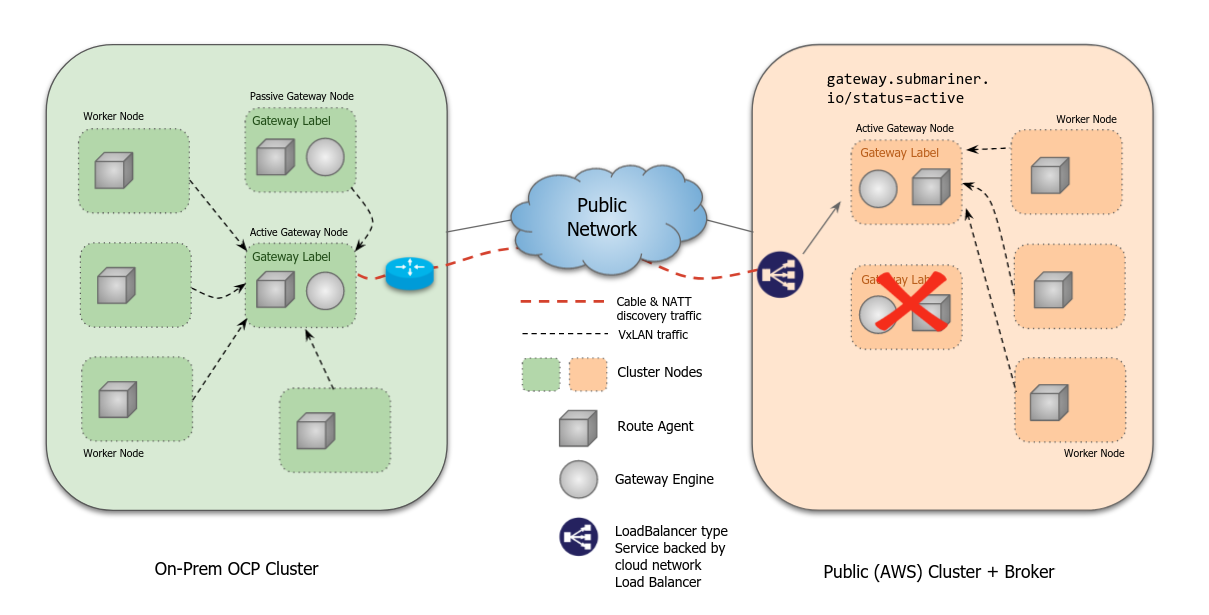 This mode is specific to the libreswan cable-driver which is based on IPsec. Other cable drivers ignore this setting.

When enabled for a cluster during subctl join, the gateway will try to establish connection with other clusters by configuring the IPsec connection in server mode, and waiting for remote connections.

Remote clusters will identify the preferred-server mode of this cluster, and attempt the connection. This is useful in environments where on-premises clusters don’t have access to port mapping.